I thought this was a great article by Michelle Warren of The Chronicle in Windham, CT  It details why a grassroots community coalition is pushing back against a large healthcare corporation, which has decided that Labor & Delivery services to a rural hospital with a large Hispanic population must end.

WILLIMANTIC — Decades ago, one of Brenda Buchbinder’s three children had to be resuscitated shortly after being born at Windham Community Memorial Hospital.

During a protest Thursday, she said if she had to ride in an ambulance to another hospital, which WCMH plans to have expectant mothers do, she isn’t sure her daughter would have lived.

“They worked on her for 45 minutes to bring her back,” said the Willimantic resident, whose daughter is now 36.

Buchbinder was among a small group of members of the Windham United to Save our HealthCare coalition protesting outside the Willimantic hospital.

The group is concerned about Hartford HealthCare’s proposal to shut down Windham Hospital’s birthing unit.

Hartford HealthCare officials have cited low birth rates and staff shortages as reasons for their proposal to close the maternity unit.

Protesters said they gathered 100 signatures on their petition at the Willimantic Food Co-op Wednesday.

The petition was also available for people to sign during the Willimantic Boom Box Parade on July 4 and during the protest Thursday.

Cheryl Kapelner-Champ of Pomfret, a retired nurse who worked at Windham Hospital in the 1970s, said she was concerned health care providers may be prioritizing profit “over the suffering of people.”

According to the Hartford HealthCare’s website, Windham Hospital has the lowest number of births among Connecticut hospitals and, as a result, has difficulty recruiting providers and staff to continue the service.

“In its application to the state, Windham Hospital has presented a comprehensive and safe plan that provides the highest level of care for the mothers and babies we serve,” Hartford HealthCare officials said in a statement.

The Women’s Health Ser-vices program provides services for the physical and emotional well being for women.

Hartford HealthCare filed a certificate of need application with the State Office of Health Strategy (OHS) on Sept. 3, 2020.

Before a decision is made on the application, a public hearing will be held to gather input from the community.

On Thursday, OHS Dir-ector of Communications Laurence Grotheer said a public hearing had not been scheduled yet.

He said the lead attorney for the certificate of need unit resigned and the goal is to find a replacement for that person soon.

“We’re in a little bit of a holding pattern now,” Grotheer said.

He said OHS has the option of issuing conditions when it renders decisions on certificate of need applications.

“People make mistakes,” she said. “They could turn it around.”

“The lack of transparency really bothers me,” she said.

According to the Hartford HealthCare website, Wind-ham Hospital will provide transportation to The William W. Backus Hospital in Norwich for those who do not have it.

The website also indicates expectant women should call 911 when they are ready to deliver and they will be transported to Backus.

Transportation will also be provided from the Windham Hospital emergency department.

According to the Hartford HealthCare website, Backus is about 17 miles from Windham Hospital.

Those who would prefer to deliver their baby at a hospital other than Backus will make arrangements with Dr. Eugene Rozenshteyn, the website indicates.

Buchbinder said she is concerned about the dangerous roadways people would have to go on to get to other hospitals, such as Backus and Manchester hospital.

The petition is available at the Windham United to Save our HealthCare Facebook page and available for download at bit.ly/3hU3Ici. People can email their signed petition to CONcomment@ct.gov.

Posted by John Brady at 8:10 AM No comments:

Thank you to the 30,000 dedicated educators, healthcare professionals and public servants of AFT Connecticut. Your dedication to your students, patients and the public you serve is an inspiration.

Today I begin my 4th term as your Executive VP. The opportunity to serve you, alongside my friend and president Jan Hochadel, our leadership team, and our dedicated staff makes this the best job in the world.

Thank you to our AFT CT Executive Committee VPs, our Local presidents and activists, the officers and staff of AFT - American Federation of Teachers, and my sisters and brothers of AFT Nurses & Health Professionals and the unions of the Connecticut AFL-CIO.

I am a better person for knowing you.

We have much work to do.

EVERY worker deserves a voice.

Posted by John Brady at 6:28 PM No comments:

It had fallen to below 100 on 6/29/20 and stayed there all summer.
It’s been a long struggle with Covid. Our healthcare workers have been heroic. Our teachers and school staff have adapted and adapted again. Our public employees have not only kept the essential functions running, they have taken on new and ever changing responsibilities.
A point of personnel privileged. I am very proud to be part o f a union of professionals, a union of caregivers, educators, and public servants. Words are not enough, but thank you and solidarity my sisters and brothers.
Things are improving, but we’re not done yet.
63% of Connecticut has received at least one vacination and 54% are fully vaccinated. While this is great, demand is slowing and there are still many more to vaccinate, and the unvaccinated and children under 12 are still vulnerable.
Info from DPH today, including this statement:

COVID-19 Control Measures: Healthcare facilities should no longer use crisis capacity strategies for N95s/respirators as the supply and availability of NIOSH-approved respirators has increased and COVID-19 cases rates are reduced.

This week’s updates for Connecticut Physicians, APRNs, PAs, and RNs from DPH:

Now is the time to be proactive with patient outreach and use existing patient communication channels to reach families with children eligible for COVID-19 vaccine and younger children overdue for routine vaccines.

COVID-19 Control Measures: Healthcare facilities should no longer use crisis capacity strategies for N95s/respirators as the supply and availability of NIOSH-approved respirators has increased and COVID-19 cases rates are reduced.

COVID-19 Testing: Check out CDC’s Test for Current Infection guidance to see who should and should not get tested.

CDC’s COCA Call on Evaluating and Caring for Patients with Post-COVID Conditions has been postponed. Enter your email on CDC’s COCA page for clinician outreach/updates from CDC.

CT DPH Provider call-in: We are moving to an every-other-week cadence. Please join us next Friday, June 11 for our next Healthcare Updates and Q&A session. Register at: https://us02web.zoom.us/meeting/register/tZIld-6rqzMuE9dMkSPTxj1d_VcGeyWMWKVK

Posted by John Brady at 5:59 PM No comments:

10 years ago yesterday, May 11,2011, a group of nurses at Backus Hospital stood together and claimed a voice in the workplace. We formed the Backus Federation of Nurses, AFT Local 5149.
It was not easy.
But it was worth it.
Today, because of the dedication of hundreds of nurses, the support of the community and labor, and the expertise of AFT and AFT Connecticut, the Backus Nurses have a voice to advocate for themselves, their families, their community and their parents.
Thank you to everyone who made this possible and who have worked so hard to make my home local what it is today.
Solidarity sisters and brothers. 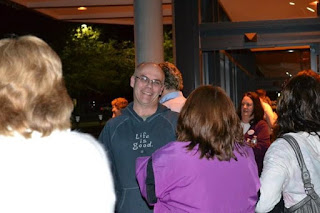 Posted by John Brady at 7:17 PM No comments:

First I’d like to wish you all a Happy Mother’s Day to all the mothers, grandmothers, aunts, and anyone who fills the vital role of raising young ones.
I’d also like to wish you all a Happy Nurses’ Week, and a Happy Teachers Appreciation week and Public Service Workers Week.
I sometimes get asked what it is like to be part of a union as diverse as AFT. I usually reply that there is never a dull moment. The reality is that as different as it is to be a healthcare provider, an educator, or a public servant, there are also many similarities.
We all teach and provide needed healthcare and public services, we just do it in a variety of locations and slightly differently.

So thank you all.

Connecticut is the first state to be over 50% of those over age 16 “fully vaccinated”! Our hospitalizations are now at 309 state wide. The Pfizer vaccine is expected to be approved soon for 12-16 year olds.

Below is some info from AFT. In particular I want to call attention to the Moral Injury Project. It is a new national project to call attention to the need for system level changes to healthcare to deal with Moral Injury, which is defined as “psychological, biological, spiritual, behavioral, and social impact of perpetrating, failing to prevent, or bearing witness to acts that transgress deeply held moral beliefs and expectations"

We all know what it is, it’s the conflict that arises when the job you want to do is not possible because you just don’t have the time or resources. It’s comes from being forced to chose between doing the best you can do for all your patients or doing a job like you were trained in school to do and you want to do, for only some of your patients. There is no good answer because the question is invalid. The question should be, how do we provide the needed time and resources to do the work we Should and Want to do?  (And you know what? Educations and public servants are effected by Moral Injury too) This Program is designed to make the public aware, so that we can make system changes. I strongly urge you to share with your members and ask them to submit their stories.

Also included below is a link to  The latest issue of AFT Health Care , our AFT Healthcare magazine, a video from Randi, and some info on workplace violence. 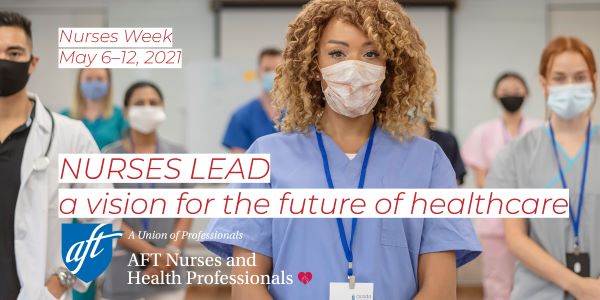 While COVID-19 has surged and ebbed nationwide, our members who work in healthcare have provided lifesaving treatment and support to those in need. The AFT celebrates National Nurses Week, May 6-12, by inviting our community to say thank you by recording a short video or message that we can share on social media. And be sure to watch AFT President Randi Weingarten's thank-you video. We’re also launching the Moral Injury Project to raise awareness about the challenges facing nurses, and we’re taking action against workplace violence. 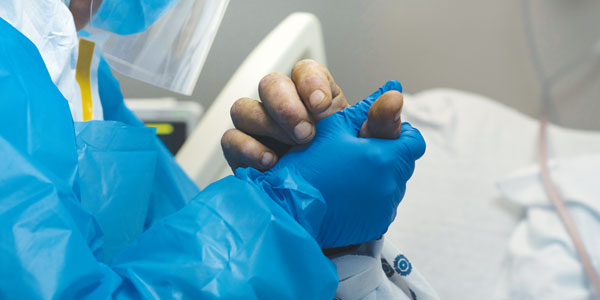 The moral imperative of healthcare

While vaccines offer hope, the pandemic continues to expose inequities in healthcare and accentuate the challenges faced by frontline providers. The latest issue of AFT Health Care delves into the severe problem of moral injury among healthcare professionals and discusses the deep changes necessary for patients and providers to thrive. Also in this issue: the importance of respectful maternity care for women of color, how clinicians can support health literacy and equity through better communication, and the essential work of nurse practitioners. 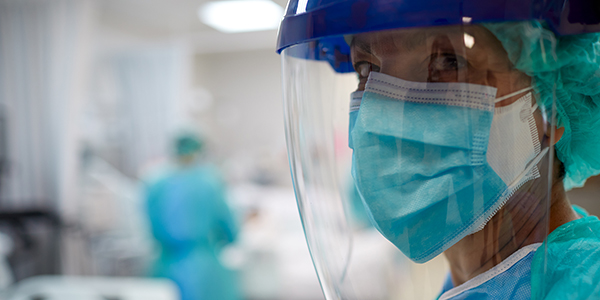 The pandemic has drastically affected our members, with the AFT losing more than 300 members to COVID-19. For more than a year, nurses and health professionals have been caring for patients while their hospitals made choices that put them at risk. These members have been filing complaints with the Occupational Safety and Health Administration and demanding an emergency safety standard for COVID. Now, more help may finally be on the way. 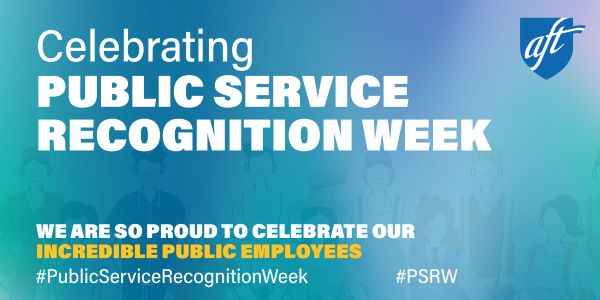